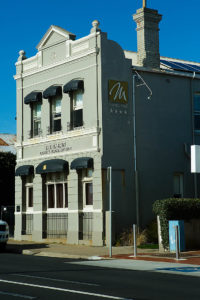 The building dating from as early as 1907 demonstrates the characteristics of a moderately-sized Federation bank with manager’s residence on the upper floor. 1919 saw the National Bank go into liquidation selling the building to the Commercial Bank of Australia. In 1982 the Commercial Bank was taken over by the Westpac Bank until 1985 when they moved next door. The building was then altered to become a private dwelling.